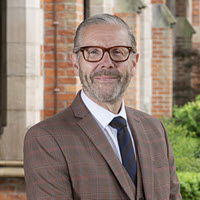 David Jones is Professor of Pharmaceutical and Biomaterial Engineering at Queen’s University Belfast and, since 2014, Pro-Vice-Chancellor for Education and Students.

His research concerns the characterisation, formulation and engineering of pharmaceutical materials/dosage forms and biomedical devices. He is the author of three textbooks, 15 patents and over 450 research papers/communications.

He has received four international awards for his research, namely the British Pharmaceutical Conference Gold Medal Awards (1997), the Lilly Prize for Pharmaceutical Excellence (1997), the Academy of Pharmaceutical Sciences Innovation Award (2017) and the Griffith Medal of the Institute of Materials, Mining and Mining (2019)