Principal and Vice-Chancellor, University of Strathclyde 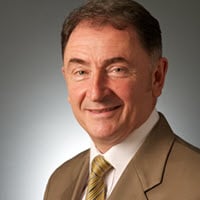 Professor Sir Jim McDonald is a three-time graduate of Strathclyde having taken his BSc, MSc and PhD degrees in the area of electrical engineering, power systems and energy economics.

On first graduating, he worked for seven years in the electric utility industry, re-joining Strathclyde in 1984 as a “new blood” lecturer in Electronic & Electrical Engineering.

He was appointed to the Rolls-Royce Chair in Electrical Power Systems in 1993, became Head of Department of Electronic and Electrical Engineering in 2003 and served as Deputy Principal for Research and Knowledge Exchange from 2006. He became Principal and Vice-Chancellor of the University of Strathclyde in March 2009.

In October 2019 he was elected President of the Royal Academy of Engineering (RAEng), becoming the first Scottish holder of the office.

Sir Jim Co-chairs, with the First Minister, the Scottish Government’s Energy Advisory Board. He is Chairman of the Independent Glasgow Economic Leadership Board and is a past-Chair of the Board of the Glasgow Science Centre.

He is delighted to act as the Chancellor of the Children’s University, a charity raising education aspirations for children and their families. He is President of CESAER, the association of Universities of Science and Technology with 52 member institutions.

He currently holds several senior non-executive business appointments on the Boards of ScottishPower, the Weir Group, the UK Offshore Renewable Energy Catapult Board and the UK National Physical Laboratory.

He chairs two of the pan-Scotland university research pools in Energy and Engineering.

Previously he has been a Board Member of: Scottish Enterprise; UKTI Energy Excellence Board; and, Scottish Science Advisory Committee. He has held other company positions with ASCADA (acquired by GE) and Axeda Systems, a NASDAQ quoted company.

In the Queen’s Jubilee Birthday Honours List on 16 June 2012, Professor McDonald was awarded a Knighthood for services to education, engineering and the economy. In September 2013 Professor McDonald received the “Outstanding Contribution as a Business Leader” recognition at The Herald’s inaugural Inspiring City Awards event.