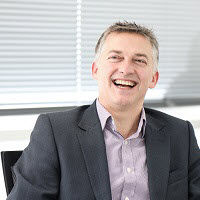 Steven Harris co-founded Circassia on 19 May 2006 and led the Company as Chief Executive Officer until December 2019. Steven IPO’d Circassia in 2014 and transformed it from a biotech business to a specialty pharma business focused on respiratory with direct sales teams in the US, China and key EU markets.
Steven has extensive experience of leading specialty pharmaceutical companies.

Prior to co-founding Circassia, he was a founding member of the private equity backed management team that grew Zeneus Pharma Limited into a successful specialty pharmaceutical company and managed its acquisition by Cephalon Inc. (now part of Teva Pharmaceutical Industries Limited). Prior to this he served for seven years as Chief Financial Officer of PowderJect Pharmaceuticals plc and was a key member of the management team which grew the organisation from a private biotechnology company to a publicly listed one and transformed it into the world’s fifth largest vaccines business, before it was acquired by Chiron Corporation in 2003.